The business was founded on 1 December 1909 by Arthur Steiber (1879-1961), the current owner’s grandfather, on the 2nd floor on the western Kaiser-Joseph-Straße between Bertoldsbrunnen and Martinstor. At that time, in the late imperial period, jewellery was commonly crafted by hand due to the lack of an industrial alternative. After a few years, the company moved to a ground floor on Konviktstrasse, near Münzgasse. The family’s apartments were located above the store. Grandmother Luise Steiber, née Baumann, surprised the grandfather in 1937 when she bought 16 Oberlinden, which has remained the location of the jewellery store ever since.

Like its medieval neighbours, this 1379 house called “Zum Blaufuß” is made up of a front building and a rear building, with a small courtyard with alcoves in between. After its founding in 1120, Freiburg soon had around 5,000 inhabitants who lived in a happy symbiosis of trade and black forest mining.

Especially during the Second World War, when precious metal production and use was under state control, working in the jewellery business was very difficult and wedding rings for example could only be made if the necessary gold for them was provided by the customer. After they had purchased the house, the Steiber family moved into the apartment above the store and when the only son, Berthold Steiber senior (1923-2011), came back from Russian captivity as a late returnee from the war, he followed in the founder’s footsteps and joined the goldsmith profession.

While in its second generation, the Steiber Jewellers business in Oberlinden began to grow and employed up to 4 goldsmiths in the workshop. Berthold Steiber, supported by his wife Gisela Steiber, née Marbe, was also involved in training and became guild master. Various conversions (1953, 1973, 1998) led to the expansion of the jewellery store by removing the hallway next to the shop. In 1954, the next son of the family, Berthold Steiber junior, the current owner, was born. 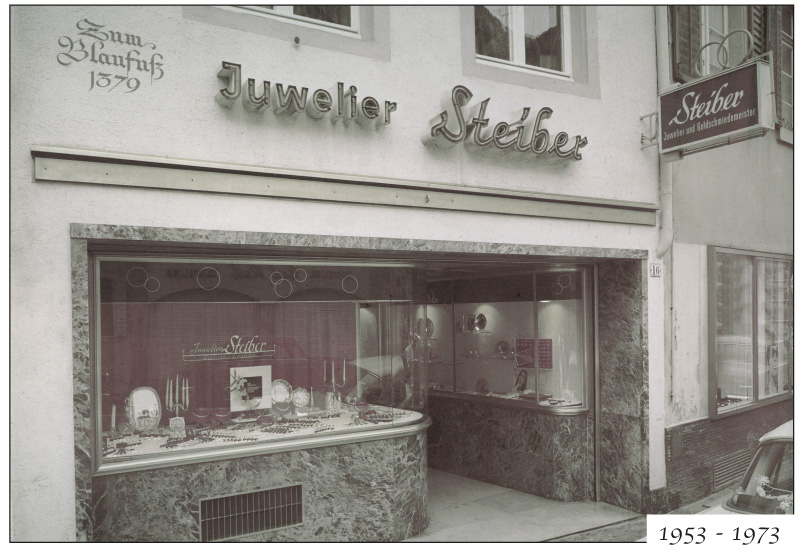 For a personal appointment reach me at

Any cookies that may not be particularly necessary for the website to function and is used specifically to collect user personal data via analytics, ads, other embedded contents are termed as non-necessary cookies. It is mandatory to procure user consent prior to running these cookies on your website.